Here comes the third part of Georgia’s soviet mosaics. It’s been a while but the hunt for these amazing and unique pieces of soviet art continues. In this post most of the locations are from Georgia’s capital – Tbilisi. Others were found in various parts of the country.

These mosaics don’t have any cultural or historical status; hence, as you may see, a lot of them are disappearing slowly.

The idea of these photo series is to preserve a visual memory of somewhat interesting, colorful and probably one of the best examples of the soviet art.

Without a further delay take a look and drop me a line if you know more locations.

END_OF_DOCUMENT_TOKEN_TO_BE_REPLACED

A video by Vimeo user account Leonid Tit shows an amazing timelapse video of Svaneti, Georgia. The video was uploaded in 2013. Watch it in HD and fullscrean.

Georgia from Leonid Tit on Vimeo.

Just stumbled upon at these blue and yellow ribbons on Chavchavadze ave in Tbilisi, Georgia. 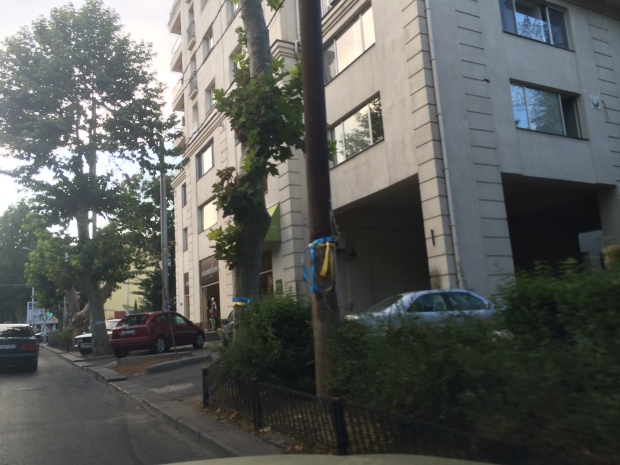 The President of Estonia Toomas Hendrik Ilves congratulates and welcomes the Georgian people to the European family.

The President of Lithuania Dalia Grybauskaitė congratulates and welcomes Georgia to the European Family.

I have been documenting Soviet mosaics in Georgia for past several months. These interesting pieces of work are disappearing due to various reasons – the glass pieces fall apart, buildings are demolished, etc. However I think their importance as a depiction of Soviet history and architecture is huge and they should be documented and preserved if possible.

Most of these mosaics are from Tbilisi – the capital of Georgia but some of them are from other parts of the country as well. Buildings with these artworks range from a bottle opener factory to bus stations and local tourist sights.

According to various local architects most of the Georgian mosaics are made from glass pieces that were usually brought from Moscow to brighten up public spaces. In past mosaics were associated with religion – temples and spiritual sights had colorful walls that were depicting either humans or phenomenons, however in USSR religion was not the main theme.

In 1930’s mosaics became one of the key elements of the Moscow subway system and soon after they became a symbol of Soviet art.

Images on these mosaics range from astronauts and workers to famous Georgian writers or even some abstract shapes.

So here they are:

Click on images to view them in a larger format.